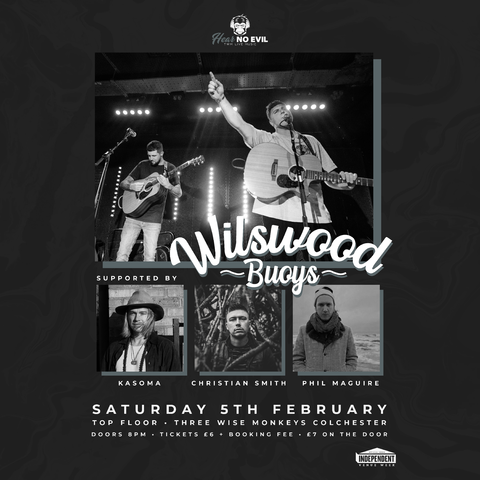 Wilswood Buoys formed in summer 2017, starting out as just a couple of mates having a jam – things quickly turned into writing music. Both of the buoys had a completely different upbringing in terms of musical styles and this led them down a path of intertwining many genres into one, to form a raw and fresh alt/folk island sound, with catchy riffs and big choruses. 2021 was huge for the band, with highlights of supporting Frank Turner in Colchester and playing the Nick Alexander Stage at Lost Evenings IV at The Roundhouse in London. We invited Wilswood Buoys to headline our final event of IVW2022 after they stole the show at Loxley’s Corner Live Takeover here last November.

We have also invited Phil Maguire and Kasoma from London,  and Christian Smith from Cambridge to perform on the night.

Phil Maguire has always been intrigued by storytelling and drinking songs. With these in mind, he has worked to create his own voice and stories out of the history of these folk tunes. A regular across London’s live music scene, he brings along a mixture of intimate, relaxed folk dreams and bluesy foot-stompers.

Kasoma is a singer-songwriter/demon-fighter who from an early age, learned to sing in Cathedral and Citadel, classical liturgy, and common prayer. The winding road from London led to King’s Canterbury, East Asia and The Berklee College of Music in Boston, MA.
From the bleacher lights of Fenway Park to the boards of Carnegie Hall in New York, the vibrant city skies of Hong Kong, Moscow, Sydney and other celebrated European stages, performing and sharing original songs at intimate venues across the World, the journey is neverending…

Christian Smith is a singer-songwriter from Cambridge who takes influence from the likes of Brian Fallon, Noel Gallagher, Dave Hause and Jason Isbell – writing in a way that fuses Americana music with hard-hitting rock melodies.

This gig takes place on the top floor of Three Wise Monkeys Colchester.

CELEBRATING THE SPIRIT OF INDEPENDENCE & THE CULTURE OF LIVE MUSIC
Independent Venue Week is a 7-day celebration of music venues around the country and a nod to the people that own, run and work in them, week in, week out.

These venues give artists their first experience of playing live in front of an audience. They give fans somewhere to get up close to artists that one day, may well be playing stadiums and festival main stages. They also provide those wanting a career in music, off the stage, the chance to learn their craft up close in a small venue.

Independent Venue Week is unique in that it is a nationwide initiative with a completely local feel.

By championing these venues, we are able to highlight why they are so much more than just places for live music – they are cultural hubs for learning, creativity, arts and culture more widely connecting people in their local community of all ages, backgrounds, abilities, genders, skills and walks of life.

These venues, all local businesses, are the backbone of the live music scene and Independent Venue Week recognises all that they have done to create some of the most memorable nights of the past so they can continue to do the same in the future.