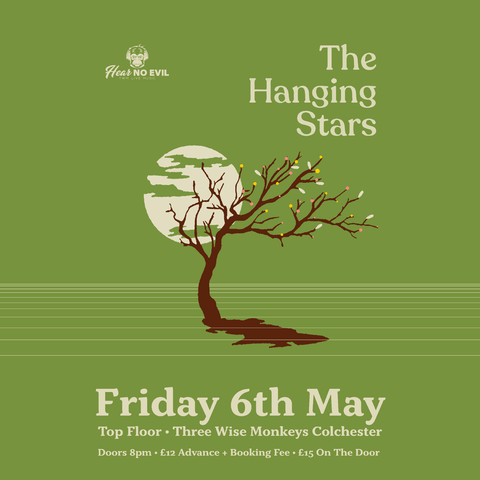 Blending folk pastoralism with swampy 60s Americana, The Hanging Stars sound like the missing link between the California desert sun and the grey skies of London Town. The album was recorded between LA, Nashville and Walthamstow, with each of these vastly different places leaving an indelible mark on the songs. Their debut album Over the Silvery Lake came out in March 2016.

The band is made up of songwriter, singer and guitarist Richard Olson, Sam Ferman on bass, Paulie Cobra on drums, Patrick Ralla on banjo, guitar, keyboards and assorted instruments, with pedal steel courtesy of Horse and Joe Harvey Whyte.

The Hanging Stars place themselves firmly as part of a long folk tradition encompassing European and North American influences – as a continuation rather than a pastiche of these styles.

On their fourth studio album, The Hanging Stars edge out from under the shadow of their classic country-rock influences and exude even more of their own personalities. Recorded at Edwyn Collins’ studio, ‘Hollow Heart’ explores the more psychedelic side of Americana and country rock, using classic Byrds-ian jangle pop and Gram Parsons’ emotionality as touchstones.Supports TBA

Access – There is no lift to access the top floor of Three Wise Monkeys. There are five flights of hand-railed stairs to reach the top floor with rest opportunities between each flight.