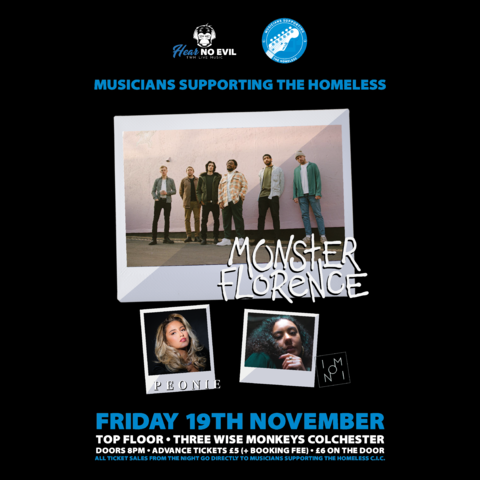 Monster Florence is a band that channels Hip-hop, Punk a,nd UK Grime over distinctive beats laced with raw lyrics and airtight delivery. Vocalists, Dream Mclean, Wallace & Alex Osiris, have been collaborating since their teens making their mark on the Grime scene with DIY music videos and Tim Westwood cyphers.

The band formed in 2014 after linking with producers and musicians Tom Donovan, Cameron Morrell and Jonny Poole. What was meant to be a one-off festival performance turned into a full-time project due to the undeniable chemistry shared on and off stage. The addition of in-house pro- duction and live instruments allowed them to develop their alternative style of hip-hop that is truly British and unique.

Since their inception they have released two EP’s, ‘The Groove’ & ‘Bad Gear’ alongside a debut album, ‘Foul’ and a host of hard-hitting singles. Their live performances are legendary which culminated in a string of UK tour dates in addition to headlining the BBC Introducing stage at Glastonbury in 2019.

At the beginning of 2020 the band signed a worldwide exclusive deal with Project Melody and plan to release a whole host of new music and video content throughout the year.

Monster Florence are supported on the night by

IMONI – Bringing her unique brand of chilled out, soulful sounds with slick hip hop beats to the venue.

PEONIE – who started her career starring in The Sound of Music Westend UK tour aged 11. Since then she has propelled herself as a recording and touring artist.

Advance tickets are priced at £5 (+50p booking fee) or £6 on the door.
All ticket sales from the night go directly to Musicians Supporting The Homeless C.I.C . Money raised will be used to help support places like Colchester Emergency Night Shelter and Beacon House plus many others.

As always, on the night Musicians Supporting The Homeless C.I.C will be taking in food donations (non perishable items) and any beauty and hygiene products that you have and that are unopened.

Doors open 8pm
over 18s only