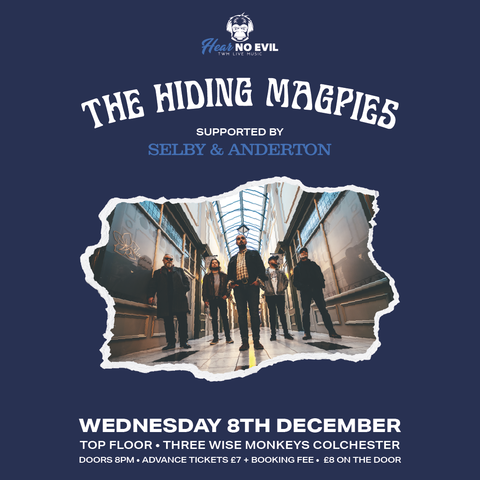 BOOK TICKETS
TWM Live presents The Hiding Magpies on their UK Tour who will be joined on the night by Connor Selby & Joe Anderton.
Taking place at Three Wise Monkeys Colchester on Wednesday 8th December ,this show is a must for fans of Americana rock ‘n’ roll.
After launching their self-titled debut album in 2017, The Hiding Magpies have shared the stage with some big names, including space rockers Hawkwind, 70s folk rock band Lindisfarne, and ex-Jethro Tull guitarist Martin Barre. This year The Hiding Magpies are releasing their second record, ‘Searching For Gold’.
Drawing influence from the sounds of rock ‘n’ roll bands such as Tom Petty and the Heartbreakers, The Rolling Stones, Wilco, The Byrds, and Steve Earle, their latest album offers an upbeat tempo coupled with bright catchy melodies, delivering a new revived sound of Americana rock ‘n’ roll.
Selby & Anderton will be opening the night, making a very welcome return to Colchester.
Tickets are on sale now
£7 advance (+ 70p DesignMyNight booking fee)
£8 on the door
Doors 8pm
Over 18s only
This gig takes place on the top floor of Three Wise Monkeys Colchester
Access – There is no lift to access the top floor of Three Wise Monkeys. There are five flights of stairs to reach the top floor with rest opportunities between each flight.